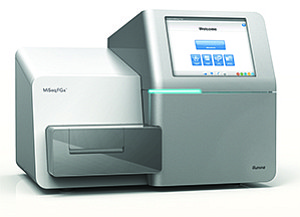 Illumina Inc. has developed a technology that could transform the work done by crime scene investigators, helping to solve cold cases by uncovering the information hidden in degraded DNA.

For the past several decades, DNA testing has been helpful, but underutilized. Crime labs currently use a technology that involves slicing DNA into strands and analyzing small areas known to differ among individuals.

Investigators compare patterns in the strands with possible suspects, looking for a puzzle-piece match.

Although these distinctive patterns might help differentiate one suspect from another, the technology doesn’t offer descriptive details about the person in question — details such as a specific physical feature that may be useful to law enforcement. Once the DNA from the sample is sliced multiple times, it becomes degraded and is no longer useful for further testing.

“There are times when you have very little material to work with — lipstick on a cigarette butt or a strand of hair,” said Kirk Malloy, senior vice president and general manager of Illumina’s life science business. “With this very small amount of material, you might have to do a lot of different experiments. And if you don’t have enough sample, you could get an imprecise result.”

With Illumina’s new machine, the MiSeq FGx, researchers not only can glean information from smaller or degraded samples, they can get specific details about the person’s genetic makeup.

“Because we’re actually sequencing the DNA itself, we know things like hair color, eye color and ancestry,” Malloy said. “So we can determine if the sample is from a person of European or Asian ancestry, for example.”

This information can be extremely useful to law enforcement for finding persons of interest, or narrowing a suspect pool in ongoing investigations. It also can be critical in cases involving missing persons or unidentifiable human remains in mass disaster situations.

While Illumina’s new sequencing machine may be highly useful in crime labs, it takes time to change the status quo where evidence matters most — the court room.

“This kind of technology must go through evaluations for several months,” Malloy said. “And there has to be court cases where they use our technology to generate admissible evidence.”

The issue is not so much the use of the MiSeq FGx in particular but rather the use of next-generation sequencing in general.

An unusual pending court case in Suffolk County, Mass., involving identical twins could be the first instance in which next-generation sequencing is used to determine evidence.

The investigation concerns two young women who were abducted at gunpoint while walking home at night in 2004. The crimes happened eight days apart, but the pattern was the same: the women were shoved into a car by two men, pistol-whipped, driven to a location and raped. While collecting her clothes, the second victim managed to grab the condom one of the men had worn; she hid it in her pocket and turned it in as evidence.

One of the two men involved pleaded guilty to the attacks in 2012. The other remained at large. Police had a suspect, but they couldn’t pin the crime on him due to a twist of genetic fate: he had an identical twin brother, and DNA from the condom matched both siblings.

Luxembourg-based Eurofins Scientific has developed a test using Illumina’s technology to differentiate the DNA of the identical brothers.

Once this case is concluded, Malloy said he believes crime labs will begin adopting the same technology to bolster evidence.

“Once these court cases are decided, it establishes a history of credibility for the new technology,” Malloy said. “This is normal in diagnostics or anything that has to do with criminology. It just takes a while for the people who use the information to establish its legitimacy.”

Malloy said it likely will be a year or more before this technology is used in casework, but he said he believes that progressive labs in forensics will buy the product over the next six months.

Proof Is in the Results, Revenue

“Ninety percent of the sequencing data that’s created in the world comes from our machines,” Malloy said. “There are legacy companies and startup companies, but we’re the only company that provides whole genome next-generation sequencing.”

Illumina made headlines last January when it launched the HiSeqX — the first machine to sequence the human genome for $1,000. After its debut, the company’s revenues increased 31 percent from $1.42 billion in 2013 to $1.86 billion last year.

Illumina is currently valued at $26.2 billion, a market cap higher than the highly publicized Tesla Motors valuation and nearly on par with mega-corporations such as Sony and LinkedIn.

Illumina’s stock was trading around $183.60 per share April 2 (midday) on the NasdaqGS under the stock symbol ILMN.