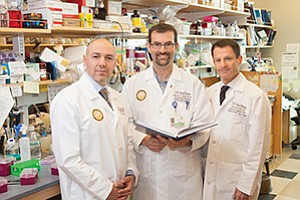 What if we could engineer “killer cells” to wage war on tumors, and then program the little soldiers to seek a specific kill zone? What if glowing tumors could tell doctors which tissue material to remove during surgery?

These are just two of the recent breakthroughs in cancer research being undertaken by the hundreds of local biotech firms that are pumping money and resources into the oncology market — a market that’s booming with players, innovations and a demand that just won’t quit.

With a skyrocketing incidence rate and 13.7 million Americans living with cancer or a history of cancer in 2012, the oncology drug market is projected to be valued at $109 billion by 2020, according to Ace Business and Market Research Group, a research firm focused on medical technology and pharmaceuticals.

The California Healthcare Institute (CHI), in a report released in November, said companies developing drugs and therapies for cancer consistently rank at the top of the biomedical industry charts, with 319 new drugs at the end-phase of development in California alone.

Cancer drug companies often benefit from quick regulatory review times due to a “fast track” option for drugs treating life-threatening diseases. This shrinks the timespan between research and development dollars flowing out and sales and commercialization dollars flowing in.

With a high rate of demand and less red tape, experts say investors are much more likely to support companies pursuing inventive ways to treat cancer.

The San Diego Business Journal spoke with some of the region’s leading cancer researchers and asked them to identify emerging technologies in the cancer field. We take a look at four of those therapies.

“It’s a fascinating technology,” said Dr. Scott Lippman, an expert in cancer research and treatments at the University of California, San Diego and director of its Moores Cancer Center. “You take these T-cells and engineer them so that they’re incredibly armed to kill the cancer. Then you give the T-cells back to the patient. It’s like arming the patient with missiles.”

This therapy can be so powerful that patients must be admitted to the hospital while the therapy is administered. Sometimes, Lippman said, patients can end up in the intensive care unit.

“These T-cells become so effective that they kill cancer cells too quickly,” Lippman said. “This releases the material inside the cells which can kill (the patient). So you have to watch the patient and do dialysis to clear out the dead cells.”

This therapy has shown great success in treating blood cancers, like leukemia, but Lippman said research is beginning in solid tumor cancers as well.

Dr. Ezra Cohen, associate director at Moores Cancer Center, said UCSD is developing a program to design these cancer-attacking cells. The facility, internally being called the Cell Processing Center, will be in collaboration with the Sanford Consortium for Regenerative Medicine and the UCSD Shiley Eye Center and is set to open in the middle of 2015.

Cancer In Their Sights

A San Diego-based biotech firm called Avelas Biosciences Inc. is developing a way to provide doctors with a “luminous map” that outlines the extent of tumors so that surgeons can remove cancerous growth while leaving the healthy tissue intact.

In September, Avelas wrapped up a $7.4 million Series B round of financing to fund the development of the fluorescent product, AVB-620, through a clinical trial in breast-cancer surgery patients. The product, also known as the Avelas Cancer Illuminator, contains a fluorescent chemical attached to a “tether” that blocks the fluorescence. Enzymes in aggressive cancers break apart the tether, leaving the chemical to be absorbed by the cancerous cells. During an operation, the surgeon looks through a fluorescent imaging camera system that lights the margins of the tumor. The system superimposes a view of the tumor on the surgeon’s normal view.

The cancer illuminator emerged from the work of UC San Diego scientist Roger Tsien, who shared a 2008 Nobel Prize in chemistry and research about green fluorescent proteins. The chemical in Avelas’ product is a protein fragment derived from the work of Tsien, a co-founder of the company.

Cutting Out the Scalpel

Surgery is an important part of treating cancer. In addition to the removal of the first tumor, follow-up surgery is often required so pathologists can discover details about the cancer’s progression. This information is vital for the doctor to make treatment decisions for the patient.

“For people with solid tumors, you have to do an invasive biopsy to make a diagnosis and follow the cancer,” Lippman said. “It’s risky, and there’s a possibility for complications. Liquid biopsies (as an alternative) is a really active space, and it’s an interesting idea.”

San Diego-based Trovagene Inc. is hoping to get around the knife and scalpel approach by developing liquid biopsies; more specifically, a way to test a patient’s urine to detect the presence of cancer.

Many companies are working on liquid biopsies involving blood tests. However, according to Trovagene, cell-free DNA lasts longer in urine than in blood. Collecting urine samples is easier than having blood drawn, and unlike blood samples, which must be refrigerated, urine can be shipped at room temperature.

Trovagene’s CEO Toni Schuh said patients can take urine samples from the privacy of their own home rather than visiting labs and patients can easily give large sample volumes — unlike blood, which can only be taken so often.

Hit ’Em With Your Best Shot

While traditional chemotherapy is a toxic treatment, killing not only cancer cells but healthy cells, Lippman and Cohen said the cancer research community has been focusing on treatments that trigger an immune response — making use of the body’s naturally occurring defenses. This area of study is called immunotherapy, and it is the most active field in oncology research and therapies, Lippman said.

“Although the idea of immunotherapy has been around for a long time, we’re just starting to see the clinical impact,” Lippman said.

While engineered killer cells are fun to imagine, a more common approach in immunotherapy is to develop vaccines that trigger an immune response. Drug developers have made preventive cancer vaccines, such as the human papomillavirus (HPV) vaccine intended to prevent cervical cancer.

“The other approach is to make a therapeutic vaccine,” Cohen said, adding that most companies choose to target the cancer cells with the vaccine.

“It’s a different idea,” Cohen said. “You’re not targeting the cancer itself; you’re targeting angiogenesis that the cancer depends on.”

Wagner said the company is set to file an investigational new drug application with the U.S. Food and Drug Administration in the first quarter of 2015, and hopes to begin clinical trials after approval. Batu recently signed a license agreement with the Regents of the University of California granting Batu exclusive rights to develop and commercialize their HMGB-1 derived vaccine platform, a technology that can be used in conjunction with ValloVax to “supercharge” the potency of the immune response.

While the number of cancer cases continues to rise — the American Society for Clinical Oncologists reported that within 16 years, cancer will be the No. 1 cause of death among Americans — scientists are doing what they can to combat the debilitating disease. While immunotherapy, liquid biopsies, personalized medicine and increasingly impressive technologies are leading the way, the methods for cancer treatment are as varied as the cancer themselves.

Scientific advancements in cancer research have increased the five-year survival rate of all cancer types from only 49 percent in the 1970s to 68 percent today, according to the American Cancer Society. Whatever the avenue, Lippman believes the science and research being developed now will dramatically revolutionize how we treat cancer patients in the future.