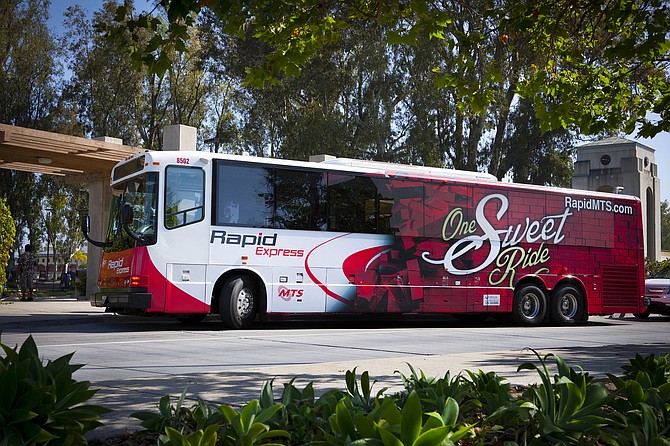 The new Rapid bus service will run from 5 a.m. to 11 p.m. seven days a week. (Photo courtesy of the San Diego Association of Governments)

The San Diego Association of Governments and Metropolitan Transit System, in partnership with Caltrans, have launched Rapid, the region’s first high-frequency, limited-stop bus service that uses the express lanes on Interstate 15.

A new Miramar College Transit Station, opening later this year, will provide service to Mira Mesa and connect with several other MTS routes there.

The Rapid service operates from 5 a.m. to 11 p.m. seven days a week. It runs every 15 minutes during weekday rush hours and every 30 minutes during nonrush hours and on weekends. The route uses 29 new buses with cushioned seats, more headroom, low-floor boarding and multiple doors.

The adult cash fare is $2.50 or $72 for a monthly pass, and buses are equipped with fare boxes that accept Compass cards.

MTS has re-aligned other routes along the corridor to provide connections to Rapid; details are available at rapidmts.com.