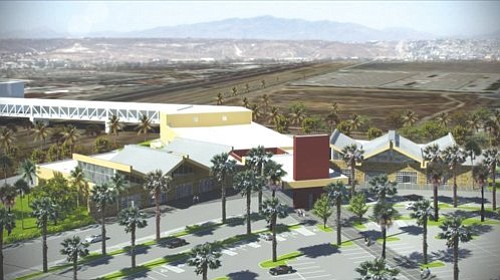 The privately funded project has been in the works for six years and is expected to open for passenger crossings in summer 2015. The 95,000-square-foot facility is being developed and will be operated by Otay Tijuana Venture LLC, a private investment group with U.S. and Mexican shareholders, including Chicago-based Equity Group Investments, led by billionaire Sam Zell. Other investors include PAP Corp. and Palareo Inc.

Developers said the facility, called the “Cross Border Xpress,” will be the first to connect a facility in the U.S. directly into a foreign airport terminal. The bridge, with related security facilities, will give local ticketed airline passengers access from the U.S. side of the international border to the Tijuana airport on the Mexican side.

Although work at the site actually began in early June, developers had not announced it, nor had they released details such as the project’s estimated cost; work on the Mexico side began last year.

The bridge is expected to serve about 2.4 million passengers who already cross the border as part of their travels, enabling them to avoid long delays at the San Ysidro and Otay Mesa land ports of entry, developers and local officials said.

Local users of the bridge will be able to access more than 30 destinations within Mexico from the Tijuana airport, many of which are not served by other Southern California airports. The Tijuana airport also has direct flights to Shanghai and Tokyo.

U.S. Customs and Border Protection will staff security operations at the bridge, through an agreement with the project’s owners. The project includes a 390-foot-long bridge with divided north-south corridors, with parking, indoor and outdoor waiting areas, retail and food offerings.

The project is being financed by Bancomext and Invex, with construction underway by the San Diego offices of Turner Construction and Hazard Construction, and Mexico’s Grumesa S.A. de C.V., developers said.