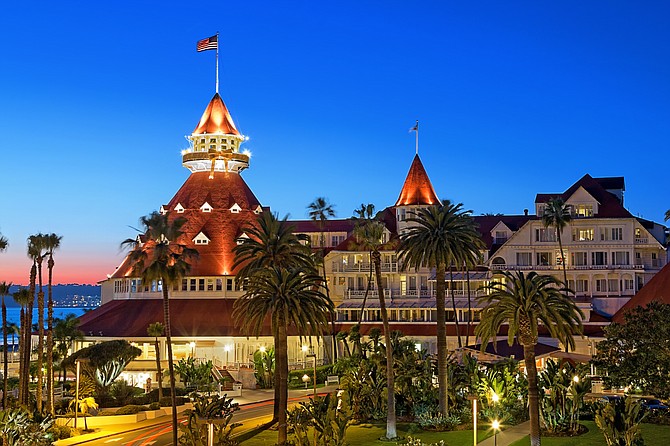 Experts say the historic Hotel del Coronado, which is marking its 125th anniversary this year, was instrumental in putting San Diego on the map as a national tourist destination.

The resident historian at Hotel del Coronado notes that the historic beachfront property — marking its 125th anniversary this year — not only put San Diego on the map as a national tourist destination, but also helped pave the way for the military presence that also drives the local economy.

Businessman and entrepreneur John D. Spreckles came to the rescue of the hotel’s original owners as the property struggled in the tough economy of 1888. Under Spreckles’ ownership, the hotel promoted development of a military base, and Spreckles himself later offered low-cost land parcels to the nation’s earliest independent aviation pioneers to test out their planes.

In the late 19th and early 20th century, all of this caught the attention of the U.S. Army, and later the U.S. Navy, which went on to make San Diego its largest home base in the nation.

“It was pivotal in the business development of Coronado, but it’s become an icon of the whole San Diego region,” said Christine Donovan, the hotel’s director of heritage programs. “The hotel was very fortunate over the years to be owned by people who were very forward-thinking.”

Her name is not on the cover, but Donovan authored a newly released book, Hotel del Coronado History, published by its heritage programs department in commemoration of the property’s 125th birthday. It will be followed throughout the year by a series of hotel promotions and holiday events incorporating the milestone.

The 1888 opening date has traditionally been observed as Feb. 19, when the first meal was served at the hotel, though newspaper reports at the time noted that guests began arriving in late January. Over the decades, it has undergone a series of ownership changes, renovations and rebirths after major struggles to stay in business.

History and nostalgia buffs are among the most avid visitors to the 757-room beachfront property, which employs more than 1,000 people and has hosted Hollywood stars, U.S. presidents and numerous other notables over the years.

“Our history page on our site is one of the most visited pages,” said Barry Brown, the hotel’s regional director of sales and marketing. “There is a multi-generational thing at work here, where people remember their grandparents and their parents taking them here when they were young, and now they are taking their own kids to The Del.”

The hotel continues to compete effectively with much younger and hipper properties for major U.S. industry awards and accolades, with numerous recognitions for its history, architecture, family friendliness and well-kept sandy beach area. Most recently, USA Today named it among the top 27 out of 1,400 U.S. hotels of historical significance, based on feedback from historians and frequent travelers.

The hotel grew up with the city of Coronado and remains a centerpoint of its economy. Todd Little, executive director of the Coronado Tourism Improvement District, said Hotel del Coronado last year accounted for about 60 percent of the $517,000 in collections generated by a half-percent assessment on room rates at the city’s large hotels.

The assessment goes directly to local tourism promotion and is on top of the city’s 10 percent transient occupancy tax collected from all hotels. Little said Hotel del Coronado continues to be a big driver of activity in the city’s central business district, as important in attracting day-trip visitors from around Southern California as it is to bringing in out-of-state tourists for longer stays.

“It’s certainly part of the fabric of the larger business community, and a lot of what happens here wouldn’t be possible without the Hotel del Coronado,” he said.

The hotel’s most recent ownership change, credited with helping it through the latest tourism downturn, came in 2011, when a unit of New York investment firm Blackstone Group backed a $425 million recapitalization of the property’s debt and assumed a 60 percent ownership stake. Existing owner Strategic Hotels of Chicago took a 34.3 percent stake, and KSL Resorts, the hotel’s operator, remained a limited partner with a 5.7 percent stake.

Operators since 2010 have invested in a multimillion-dollar series of phased-in renovations and updates while the property stayed open for business. Brown said work has been completed in meeting rooms and other open spaces, and is currently in progress in the hotel’s lobby and restaurant, expected to be completed before year’s end.

The hotel has been careful to preserve elements of the past while meeting modern traveler demands, recently adding room amenities like Wi-Fi and brighter bedside reading lamps to its rooms and updating its restaurant menus to serve changing tastes and dietary needs. “People want a sense of the history, but they also want some modern conveniences,” Brown said.

Donovan said the 1969 opening of the San Diego-Coronado Bridge proved crucial to the long-term survival of Hotel del Coronado, since it not only eased driver access to Coronado but also allowed The Del to share directly in the uptick in hotel demand after the San Diego Convention Center opened 20 years later.

Many of those convention-goers have made Hotel del Coronado a must-see stop.

“There are so few places left that are iconic — like the White House or the Empire State Building — where people look at the picture and know exactly where it is,” Donovan said. “The Hotel Del is one of those places.”