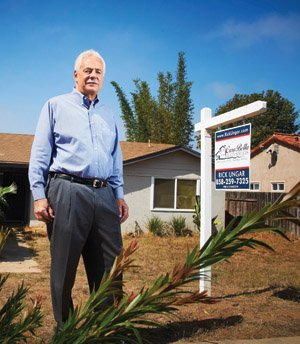 To illustrate the state of the current real estate market, Rick Ungar, a broker with Casa Bella Realty Services in Carlsbad, cited a recent experience on a house in Carlsbad he listed at $368,000. Ungar said that the home got 31 offers in the first two days and 20 of those offers were all cash. The home was bid up above $400,000 from a cash buyer and is currently in escrow. Cash investors made up 31 percent of all July home sales in Southern California.

San Diego’s residential real estate market has definitely stabilized, as evidenced by a higher number of sales and rising house values, but the lack of inventory remains problematic.

“We’re probably down to two months inventory when in a normal market there’d be six to eight months of inventory,” said Jay Berger, a broker with SoCal Real Estate in Carlsbad. “The prices are going up because there’s less to bid on.”

According to Dataquick, the La Jolla-based research firm, home sales in the county rose 17 percent in July, compared with July 2011, while the median housing price increased 5 percent to $342,000.

Dataquick found a similar upward trend for the entire Southern California region with home sales rising 14 percent and the median price growing 8 percent to $306,000 over the year.

The uptick was due to several factors, including greater demand spurred mainly by low mortgage rates, and fewer homes to choose from, which produced higher prices because of the increased demand.

To illustrate the effect of the reduced inventory, Rick Ungar, a broker with Casa Bella Realty Services in Carlsbad, cited a recent listing on a house he represented just east of Interstate 5 that was priced at $368,000.

“We got 31 offers in the first two days it was put on the market,” Ungar said. “And of those offers, more than 20 were all-cash.”

Ungar said a major reason behind the rising home prices this year has been a shift in the way banks deal with defaulting borrowers. In the past, most lenders were intent on foreclosing and wouldn’t entertain negotiating with borrowers who didn’t make their monthly payments.

But that’s been changing in the last few years. Short sales, or banks accepting less on the sale than what is owed on the mortgage, is becoming more common as banks take a different tactic in dealing with the massive number of borrowers whose loans are far greater than their house market value, he said.

“It took the banks five years to realize that they’ll lose less money on short sales than they would if they go into foreclosure,” Ungar said.

In some cases, borrowers are receiving cash payments from banks to do a short sale, proving they are eager to dispense with a property where a borrower has stopped making monthly payments, he said.

Distressed sales, either foreclosures or short sales, made up 40 percent of July’s sales in Southern California, the lowest amount since February, said the latest Dataquick report.

San Diego’s meager for-sale inventory can also be traced to the fact that this region didn’t build as much on speculation in the run-up to the bubble bursting, said Alan Nevin, principal with the London Group Realty Advisors, a real estate consulting firm.

“We literally have one of the smallest supplies (of for-sale housing) in the nation,” Nevin said. “The reason is that we never over-built here because we didn’t have enough lots as they did in Phoenix and Las Vegas.”

Nevin said foreclosures have been declining in recent years as the number of houses sold using subprime loans from 2005 to 2007 gets resolved in some way. “The pig is almost through the snake,” he said. “We’ve almost run out of all the homes that were purchased (with those subprime loans) in that timeframe.”

The constrained inventory of houses pushed median prices up for the traditional spring season, but the overhang of shadow inventory, or houses that are in default but haven’t been taken back by the banks, will continue to depress the market, Battiata said.

“The low inventory is a good thing but when you factor in the shadow inventory, it’s going to pull prices down,” he said. “I think we’re one or two years away from the market starting to turn around.”

Battiata estimates that about a third of the houses with a mortgage in San Diego are under water, or owe more on their mortgages than the home’s market value.

Using the analogy of turning around a large cruise ship, he says while the ship may have slowed down and seems to be drifting, it’ll take a while before the engine of a normal market takes hold again.

“If we start the recovery in 2015, that’s somewhat optimistic,” Battiata said.

Gary London, president of the London Group, said the local housing market is definitely on the mend, but the recovery will be slow.

“We’re definitely off the bottom. We’re not far off the bottom, but we’re off of it,” London said. “It was a long down cycle, and it will be a long way up again.”

Banks Are Being Selective

He cited higher home sales and prices this year than at any time in the last four years, plus a dramatic decline in the number of distressed properties.

And while mortgage rates are at historic lows (falling below 4 percent), banks are being extremely selective in who they approve, London said.

“Typically the banks are the last to jump in because from their perspective, they were damaged the most,” he said. “The market can’t fully recover until all the players are in, and the banks are clearly not all in.”

The food chain involved in the sale of housing may have taken a major hit some four-five years earlier, but things have picked up noticeably this year, said Mark Goldman, a lecturer at San Diego State University and mortgage broker at C2 Financial Corp. “I’m having my best year since 2007,” Goldman said. “And most of (the increase) is from purchase business as opposed to refinancing, which is also a sign of the vitality of the market.”

But not everyone was on the same page. Berger, a veteran broker who has been through several cycles, says things are a somewhat better than in the recent past, but the lack of inventory and increased competition means it’s more difficult to put deals together and keep them in escrow.

“I don’t know if anybody is getting rich in this market,” he said.