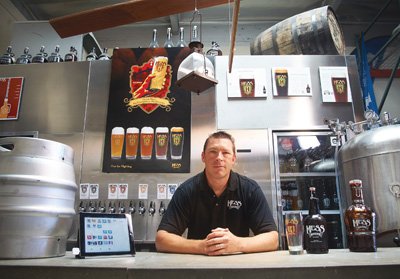 Mike Hess, owner of Hess Brewing, is in his tasting room at the microbrewery off Miramar Road in San Diego. Hess uses an Apple iPad with a specialized attachment and software from Square Inc. that serves as a cash register. Patrons pay with a credit card, Hess swipes the card through the attachment seen on the left side of the iPad and the customer signs the iPad screen.

People who visit Hess Brewing can enjoy a fresh beverage whose origins go way, way, way back in human history.

When it comes time to pay for a beer, however, owner Mike Hess opts for a 21st century twist on the credit card machine. Hess records the transactions from the tasting room at his microbrewery using an Apple Inc. iPad with a specialized attachment and software. The iPad serves “more or less as a cash register,” the brewer said.

San Francisco-based Square Inc. produces the system that Hess uses. Thousands of other merchants in the region use it too, according to a company spokeswoman.

Square offers a free card reader that attaches to an iPhone or iPad. The merchant swipes a credit card through the reader, then has people sign for the transaction on the iPad, iPhone or Android device.

The device helped Hess quickly switch from a cash-only operation to one that accepts credit cards. “We probably do close to 70 percent of our business in credit cards,” he said.

Hess said during the two years he’s been in business, Square’s software has evolved so that it now helps him keep track of inventory.

Another business that uses Square in conjunction with iPads is Refresh Coffee, a 2-year-old outfit that has coffee carts outside Alvarado Hospital Medical Center and in the Sabre Springs neighborhood.

Neal has also used credit card terminals supplied by his bank, but the banks charged account fees and maintenance fees on top of taking a percentage of each transaction. What’s more, the equipment he received had a tendency to break. “I went through three or four card readers,” Neal said.

Square’s pricing system is simpler than the banks’. “If you don’t swipe anything, you don’t pay money,” he said.

Neal uses a second variation of Square’s services, called Pay With Square, where a person uses his mobile phone to pay for a coffee drink.

When it’s time to pay, a customer’s name and photo appear on the cash register. The clerk confirms the customer’s identity, presses a button and puts the charge on the customer’s card.

“You don’t even have to take out your wallet,” said Square spokeswoman Lindsay Wiese.

Pay With Square has attracted the attention of one of Neal’s monolithic competitors: Starbucks. Beginning in the fall, Starbucks will accept Pay With Square at about 7,000 stores. The Seattle corporation is also investing $25 million in Square as part of the tech company’s Series D financing round.

Other technology companies aren’t content to let Square have all of this business.

San Jose-based PayPal, which is part of online retailer eBay Inc., has come to market with a service called PayPal Here. Like Square, PayPal distributes a card reader that plugs into mobile computers. PayPal charges merchants 2.7 percent of each transaction.

Some people feel that while Square has served them well in the past, it’s time to move on.

Scott Bergen, who runs SDRC Raceway in the Miramar area, reports that he is phasing out his Square payment system — though he plans to keep it as a backup.

Bergen runs a track for miniature radio-controlled racecars. His 20,000-square-foot building contains an “off road” track with a clay surface and rolling hills. Bergen also runs a pro shop to sell and service the 1/10th scale cars.

Square recently introduced a second pricing plan geared to higher-volume users. It’s a $275 monthly fee, with no charge per transaction.

Small businesses, of course, have other choices for credit card processing.

Edward Orysiek, who runs San Diego CardSmart Merchant Services and POS i in Kearny Mesa, offers a range of devices.

In Orysiek’s opinion, solutions such as Square are good for low-volume work. For example, he says garage sales might benefit from Square.

Orysiek’s competing solution for smartphones and tablets comes from Houston-based eProcessing Network LLC. His website advertises the service for a $35 one-time fee, plus $20 per month. The first 250 transactions are free. Afterward, transactions cost a nickel apiece. An optional secure card reader that plugs into a computer’s audio jack costs $49. There’s also an optional printer that connects via Bluetooth.

The business touts the solution as appropriate for people who work by themselves as personal assistants, auto detailers, handymen or taxi drivers. Food trucks and tow trucks can use it, as can people who work street fairs and flower stands.

With October around the corner, a very specialized class of entrepreneur may be interested to know that the solution works for one other thing.