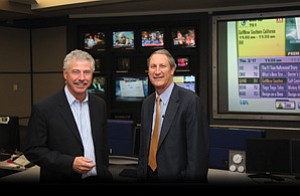 Cable television executive Bill Geppert got a glimpse of the future, way back in the early 1980s...