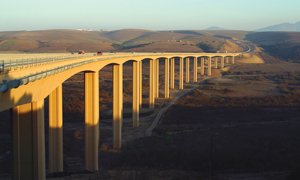 Operators of the financially troubled South Bay Expressway are in discussions with potential buyers including private sector businesses and Sandag. Indebtedness and a delayed opening contributed to a bankruptcy filing about a year ago, according to its CEO Greg Hulsizer. Photo by Photo courtesy of South Bay Expressway L.P.

Year founded: The current owners financed the project in 2003.

Company description: Owner and operator of a 9.3-mile toll road, developed and operated under a public-private partnership with the state of California. It holds a 35-year lease with Caltrans to own and operate the toll facility until it returns to state ownership.